More than 74,000 Messages about Bitcoin after the inclusion of its logo on Twitter

Since this weekend, the letter “B” in orange color that is already a bitcoin image feature, says present on Twitter. The CEO of the social network, Jack Dorsey, issued a message labeled #Bitcoin. Thus, it gave way to the use of the aforementioned label, which now displays the bitcoin logo on the social platform.

In his message, Dorsey simply placed the aforementioned label with the logo and a mention of Unicode. The latter is a standard that assigns pictograms to certain characters, as occurs in social chats with facial expressions. For example, when you type the sequence «:-)», in the different chats, the smiling emoji is displayed 😀.

For now, the deployment of the bitcoin symbol on Twitter will happen automatically when you type the #BTC or #bitcoin tags. In the compact message from Jack Dorsey, the automatic effect of the display of the bitcoin pictogram image is seen next to the hashtag #bitcoin:

Dorsey’s mention of @Unicode is a request to generalize the deployment of said bitcoin pictogram outside of Twitter. For example, it appears every time the #BTC or #bitcoin tags are written on the chats.

Bitcoin enthusiast social network users have been quick to make use of the new feature. Therefore, they have generated more than 74,000 messages that include that label until the time of writing this note.

Some of the messages are simply intended to celebrate the inclusion of the emoji on the social platform as a new advance in the global visibility of the cryptocurrency. This feature, say network users, has been highly anticipated .

Others have taken the opportunity to argue their vision on the superiority of bitcoin over other cryptocurrencies in the ecosystem, with less visibility. “There are no ‘cryptocurrencies’, there is bitcoin,” wrote for example the user @PresidentBross.

In addition to the aforementioned label, the abbreviation of the name of the cryptocurrency, BTC , also includes the logo when written as a label on Twitter.

Among the messages with the #Bitcoin tag, there are those who remembered the first mention of cryptocurrency in that social network, more than 11 years ago, when Hal Finney , one of the precursors, published “running bitcoin”.

I’m sure @halfin would be proud. He was the first person to mention #bitcoin on Twitter – and now 11 years later it even has it’s own emoji natively 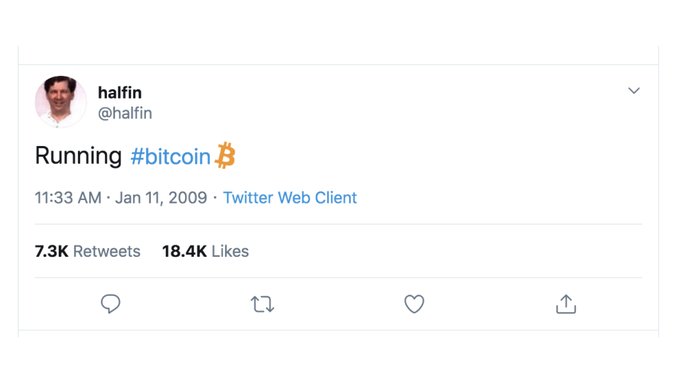 The tweeters have given the label this weekend very varied uses varied. Among other types of publications, we have cases in which the name of the cryptocurrency is simply published, without any additional bulletin or comment.

There are accounts that have taken advantage of the wave to gain visibility by drawing lots of BTC fractions or cold wallets. Meanwhile, there are users who have simply decided to issue the reminder that bitcoin is a reality or to value a prosperous future for cryptocurrency in the market.

Twitter CEO Jack Dorsey is already recognized in the cryptocurrency ecosystem as a believer in the potential of bitcoin . On the one hand, it has considered that BTC is becoming the equivalent of a national internet currency , if we consider the latter as a kind of “emerging nation-state”.

In addition, he has rejected his support for the Libra Facebook project, considering that its centralized nature contradicts what bitcoin represents, and even stated that it has no intention of creating a cryptocurrency for Twitter.

“I think bitcoin is the best bet because it has been the toughest, has existed for 10 years, has a great brand and has been tested a lot,” Dorsey said in September 2019.