Myths and realities about the adoption of bitcoin in Venezuela

Around Venezuela there are many myths. There are about their day to day, about their customs in the midst of the crisis and, of course, about cryptocurrencies. Myths are no exception in the South American country.

Mainly, about Venezuela a narrative has been generated according to which it is a country with an adoption of cryptocurrencies enviable to other countries. The most daring, dare to classify it as a “kryptonation” or, at least, as close to it. Nothing further from reality.

In Venezuela, as a result of the hyperinflation in which the economy is involved, people have chosen to seek refuge in foreign currencies, such as the dollar or the euro, to safeguard the value of their money. In that scenario, bitcoin has found a clear use case among Venezuelans.

However, the figures that are usually used to refer to an advanced adoption of this and other cryptocurrencies in the country are not held in a global scenario. One of these figures is based on the LocalBitcoins market, which is clearly reduced compared to large cryptocurrency exchange houses.

The Latin American country with the largest trade in LocalBitcoins

Yes. Venezuela is the Latin American country with the highest BTC trade volume in the peer exchange platform. With more than 540 BTC traded during the most recent week, even being this lower than previous months, when Venezuela has remained among the first of the countries with the highest bitcoin trade on that platform.

If we refer to the last week, in fact, Venezuela is second. In front of the South American country is only Russia, with 900 BTC marketed in LocalBitcoins, according to the tracking portal of this and other markets, Coin Dance.

But the global volume of LocalBitcoins is not enough to consider that the activity of Venezuelans on that site has an important impact on the bitcoin market.

In Coin Dance data, we can see that globally, during the last week, 3,594 BTC moved in LocalBitcoins. That equals about USD 31.5 million.

To get an idea, the pair with the highest volume for bitcoin, according to Live Coin Watch figures , mobilizes more than USD 487 million, not weekly, but in the last 24 hours. That number corresponds to the BTC / USDT (tether) pair in the Binance exchange.

Putting it even more in perspective, we can see the volume in USD that Venezuela moved through LocalBitcoins throughout 2019. The figure (just over USD 300 million), extracted from UsefulTulips , does not exceed the volume of the last 24 hours in Binance.

Even in the CoinMarketCap list you can see at least 24 pairs of bitcoin exchanges that have moved more than USD 300 million in the last 24 hours, in various exchange houses.

On the other hand, volumes in LocalBitcoins, both in Venezuela and in the rest of the world, have been falling steadily in recent months. Thus, Paxful, another peer exchange site with a mechanism similar to that of LocalBitcoins, has been gaining ground.

UsefulTulips figures show that in Paxful, more than USD 24 million moved in BTC during the last week. Gradually, this site has been approaching the numbers of LocalBitcoins, with an important difference: Venezuela is not among the countries highlighted by trade on this platform .

In this exchange site, the South American country is relegated to sixth place among Latin countries. And the volume did not reach USD 300 at the end of January.

The volumes of bitcoin movements from Venezuela are also not supported in a comparison with exchange sites in the region. For example, Bitso, the exchange house created in Mexico, moves in a quarter of a quarter of what Venezuela moved in LocalBitcoins last week. According to CoinMarketCap data , the Mexican exchange house moved more than 459 BTC in the last 24 hours.

If we go to authorized exchange houses to operate with cryptocurrencies in Venezuelan territory, we see volumes much lower than those of other exchange houses in the region and Venezuela itself in its exchanges at LocalBitcoins.

If we take the volume, for example, of Antwerp Coin, we can see the low levels of exchange. On its own Twitter account, the cryptocurrency exchange site published on February 1 a graph in which the exchange volume is shown. In the BTC / VES pair, just 0.6 bitcoins were traded in that period. In the case of DASH, the volume in those 24 hours was just 0.5 DASH. 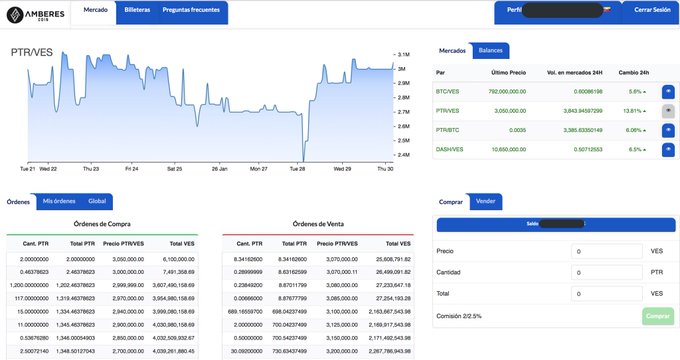 Notwithstanding the foregoing, there has been progress in the adoption of cryptocurrencies in Venezuela . Particularly, during 2019 the ecosystem showed clear signs of growth. The installation of ATMs, points of sale and the proliferation of shops that accept bitcoin and other options as a form of payment, are proof of this.

As for the cashiers, there are already two installed in the city of Caracas . The Venezuelan Exchange Company has been responsible for making these devices available for the purchase of bitcoin and dash with dollars in cash.

So far, a headquarters of Traki , one of the largest retail chains in the country; and the luxurious Eurobuilding hotel, in Caracas, are the places where you can access these ATMs. Precisely, both Traki and Eurobuilding accept payments with various cryptocurrencies , such as bitcoin, dash, ether and the cryptocurrency anchored or stablecoin tether. In the case of the hotel, the new payment method began just days ago at its headquarters in Caracas . 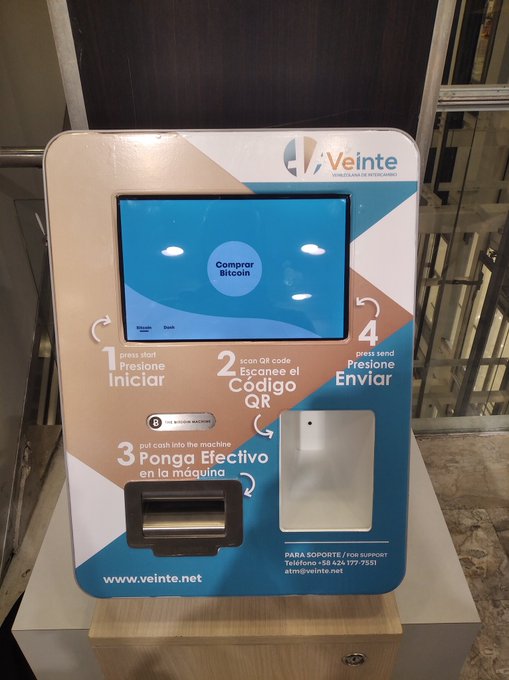 If we add the mobile tellers that Panda Group has set up, in Venezuela there are a total of 6 cryptocurrency ATM options . This is reflected by Coin ATM Radar, with the two ATMs in Caracas and mobile devices in the cities of Mérida, Barquisimeto and San Antonio del Táchira.

According to the data of this site that tracks cryptocurrency ATMs in the world, Venezuela is sixth in the region. Colombia is ahead, with 56 devices; Panama, with 16; Dominican Republic (13), Argentina, which is 11; and Mexico, with 10.

On the other hand, in addition to Traki and the Eurobuilding Hotel, reputable merchants, such as the Burger King fast food chain or the Farmarket pharmacy chain have incorporated cryptocurrencies to their payment options.

However, in most cases, merchants that use payment processors receive settlement of their funds in fiat currency . Shops do not directly store the cryptocurrencies they receive as a form of payment.

Dash, another ecosystem present in Venezuela

Not only the exchange in LocalBitcoins and the payment gateway options have said present in the South American country. Following a strong commitment to influence the national economic reality, dash, one of the main cryptocurrencies in the market, has gained ground .

In Discover Dash figures , surpassing the 800 establishments accepting the cryptocurrency, Venezuela is the country with the largest number of businesses that receive dash payments.

Similarly, many of these businesses began in the world of cryptocurrencies with dash. Then, they have been incorporating bitcoin and other cryptocurrencies into the options they offer their customers to pay for their products.

How do members of the ecosystem see it in Venezuela?

Beyond that the numbers are low if they are compared in a broad spectrum in the global market, actors involved in the growth of the cryptocurrency ecosystem in Venezuela are optimistic about the recent advances, as some of them have confirmed in direct contact for CryptoNews .

Veinte Venezolana de Intercambio, a company that has installed ATMs in Caracas, considers the demand that cryptocurrencies are having in the country very positive . “It is the right way to go, take advantage of the state of monetary reform to incorporate a cutting-edge digital economic system,” they say.

Therefore, they consider that their ATMs have had good receptivity so far. Particularly, for the possibility of changing dollars in cash, regardless of whether they are in a state of wear and tear that in some national stores prefer not to accept. This is the Venezuelan economy , between a de facto dollarization, the depreciation of the bolivar and the efforts to protect the value of their money by citizens.

For its part, Typson Sánchez, CTO of the Panda Group, says that the growth of the cryptocurrency ecosystem has been linked in an important way to the upward movements of the market. On the other hand, he adds that the government’s efforts to make its digital currency, the petro, part of the national discussion, have generated higher expectations about cryptocurrencies in the country.

On the petro, Sánchez considers that “while it is not a reality for the user on foot it is not a viable option.” With this, it refers to the difficulties of use and even of exchange that the Venezuelan government project has had so far, which were more clearly evidenced by the allocation of approximately USD 170,000,000 in petros as a bonus to pensioners and workers public

For Twenty Venezuelan Exchange, the inclusion of petro in the national conversation influences a possible overcrowding of cryptocurrencies in the country . “That public bodies , accounting processes and the national valuation system is established in petro is totally changing the vision of large holders of resources in the country,” they say about it.

Both the representative of Panda and Venezuelan Exchange agree that the ecosystem in Venezuela shows positive signs. For Sánchez, this year will continue that growth. In particular, he believes that the cryptocurrency issue “will be moved in the following months.”

For its part, the company with cryptocurrency ATMs in Caracas believes that adoption in the country “will go through a difficult, possibly uncomfortable process of transformation . ” However, he believes that this process “will be worth it” because it will serve to spread the use of these technologies among Venezuelans.