It was in 2006 that Kabhi Alvida Naa Kehna, co-starring Preity Zinta, Rani Mukerji, Shah Rukh Khan, Abhishek Bachchan, Amitabh Bachchan, and Kirron Kher launched. The movie, which was regarded forward of its time, had opened to largely optimistic evaluations. While cinephiles proceed to observe the movie with affection so far, Preity determined to deal with followers to a hilarious BTS second from the units of the movie.

The actress, on Thursday, dug out an outdated reminiscence from the Kabhi Alvida Naa Kehna days and little did she know that it could develop into an ideal Throwback Thursday post.

Sharing the {photograph} on social media, Preity additionally devised a guessing recreation for her followers. In the {photograph}, Preity was accompanied by the movie’s director Karan Johar and Shah Rukh. Alongside the snap, Preity requested followers to guess what KJo was telling her and SRK.

In her caption, Preity wrote, “Look what I found. Can you guess what @karanjohar is saying to me & @iamsrk ? #throwbackthursday #ting.”

Soon after she shared the {photograph}, followers from throughout the nation started to drop hilarious feedback on the post. Many of them, which had been co-incidentally watching the movie final evening, could not cease laughing.

A social media person wrote, “This scene was hilarious”, whereas one other one commented, “It’s been a long tiring day”. Another social media person dropped the remark, “Omg I was just watching the movie and this came up. I really miss seeing you on screen.”

Here, take a look at Preity Zinta’s post and the feedback that adopted: 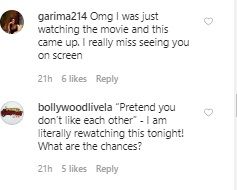 While followers are flooding the post with love and laughter emojis, Karan and Shah Rukh are but to react to the post.

On the movie entrance, whereas Preity final graced the massive display screen in Bhaiaji Superhit, Shah Rukh was final seen in Aanand L Rai’s Zero. Both the movies, co-incidentally, launched within the 12 months 2018.