After Neha Dhupia was brutally trolled on social media, following her assertion on a actuality present about dishonest and violence. The diva had chided a contestant after he claimed that he slapped his girlfriend after she cheated on him with 5 guys. A video of this interplay went viral and Neha was known as a ‘faux feminist’ amongst different issues on social media.

Yesterday, Neha Dhupia, shared a press release on her social media account to make clear the problem. Part of the assertion reads, “A guy talked about his partner who cheated on him (allegedly) and in retaliation, he hit her by his own admission. What the girl did is a choice she made which is a moral choice regardless of someone, man or women… adultery is a moral choice. Cheating is not something I stand for and it is unfortunate, that I have been misrepresented for the same…. but what I do stand for is women’s safety.”

Take a take a look at Neha Dhupia’s assertion:

Since then Bollywood celebs have been displaying their assist on social media. Taapsee Pannu tweeted, “For all the ppl writing abusive and harassing messages to you and your family should know, they aren’t on the right side of the moral compass they r acting to be the torch bearers of. Adultery is wrong morally n so is violence. One can’t be the response to the other.”

Richa Chadha additionally commented in regards to the difficulty and wrote, “Cowards hit women…If you call them out, their ilk hides behind the anonymity and safety of social media and threatens to hit and assault women. Neha, stay strong.”

Singer Sophie Choudry wrote that she is ‘proud’ of Neha Dhupia. Her tweet reads, “Proud of you for making this assertion
@NehaDhupia .. The reality that you’re being trolled for talking up in opposition to bodily abuse is totally insane!! No one has the best to touch upon anybody’s relationship selections however bodily violence is a NO below any circumstance!!”

Check out different response of celebs to Neha Dhupia’s tweet: 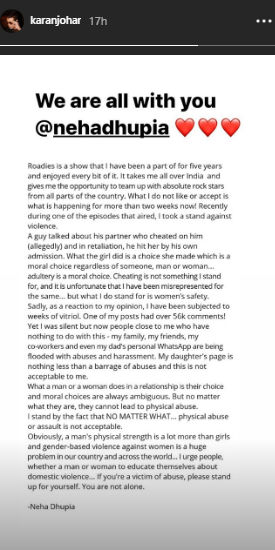 What do you consider Neha Dhupia’s stance? Tell us within the feedback!