Christopher Nolan’s Tenet grew to become the primary massive film to open in theatres in varied elements of the world amidst the coronavirus scare. The film has been taking part in in theatres in London and Tom Cruise, who’s within the metropolis to shoot for the upcoming sequels within the Mission: Impossible franchise, took day out from his busy schedule to test it out.

Earlier today, he took to social media and shared a brief clip of himself hopping right into a London taxi as he toured town to go to a film theatre to observe Christopher Nolan’s newest thoughts and time-bender, Tenet.

In the video that’s barely 34-second in runtime, Tom Cruise will be seen in a taxi carrying a masks. Moments later, just a few followers recognise him at a visitors sign, after which Cruise can been seen a bit shocked as he asks, “How does that happen? I’m wearing a mask!”

The cab then drops him to a multiplex the place he steps down in entrance of an enormous Tenet poster and says, “Here we are… back to the movies”. The Hollywood star then enters the audi and watches the movie with Mission: Impossible 7 director Christopher McQuarrie. One can hear the sound of clapping because the film begins.

After Tenet ends, Tom Cruise stands up clapping and says, “It is great to be back in a movie theater, everybody”. As he’s about to depart the theatre, a cinegoer will be heard asking his ideas concerning the film, he replies, “I loved it. I loved it”.

Check out the video shared by Tom Cruise under:

Ranveer Singh left a touch upon Tom Cruise’s post on Instagram that learn, “Ohhhhh bless up Superstar ! back to the movies ! Love it !” 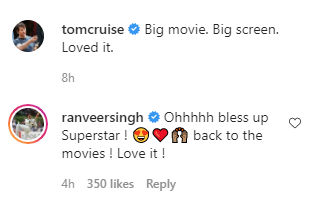 Tom Cruise will subsequent be seen in Top Gun sequel, Top Gun: Maverick. The film is slated to open in theatres in December.